We’ve been receiving a lot of questions from you about the future of Heart of Russia, our map expansion DLC for Euro Truck Simulator 2. So today, after much consideration, we feel it is time to respond by shedding some light on the situation for everyone. 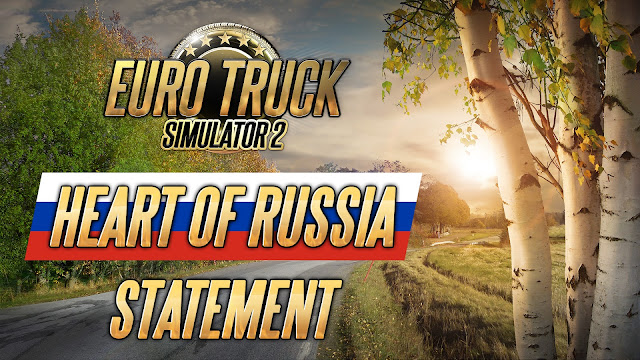 ​
On the 24th of February 2022, our Heart of Russia team was some 6-8 weeks away from completing work on the highly anticipated new DLC. We all felt really good about the result; a lot of effort had been invested in making this new region look truly fantastic in the game. We were absolutely sure that our community, especially those in Russia, would really appreciate that.

Then, all of a sudden, the entire world was rocked by the news that Ukraine had been invaded by Russia. We were in shock.

With deep concern, we watched the news about the war, and we quickly realized we had to do something to help those who were suffering. Immediately, we started contributing to several charities providing humanitarian aid within the territory of Ukraine and assistance to those who were evacuating. Later on, with the kind participation of the #BestCommunityEver, we have further increased the donations by contributing all the proceeds from the sales of the Ukrainian Paint Jobs Pack DLC. It’s incredible to see that, as of now, over 85,000 of you have decided to purchase it and contribute to this noble cause. Thank you!

However, now Heart of Russia DLC was facing a lot of uncertainty. We asked ourselves many questions, including the obvious ones. Can we ever release the Heart of Russia DLC? Should we even finish the work? Since then, we have finally consolidated our thoughts.

When developing our games we try to be as apolitical as possible, in a way shielding the global player audience from everyday controversies. We quite like the idea that our shared passion, for a truck simulation, allows people to connect, to pay a virtual visit to a neighbouring country in peace, and to enjoy a hobby that we commonly share, rather than allowing anything divisive to set us apart. But since our DLC, Heart of Russia, directly concerns Russia, and with so many people suffering, we decided to refrain from releasing the DLC so that it is not perceived in any way as being in support of or tolerance of the aggression.

We strongly believe that there is hope for the proud people of Ukraine to prevail and for the suffering to end for all. Injustice cannot and must not win. And, when the time comes for Ukraine to rebuild and heal, then we will endeavour to find a way for our Heart of Russia DLC to play whatever part it can in that healing process, for everyone.

Let us work together and live in hope that the days of despair and grief will be over soon.

Thank you for your patience, understanding, and support.